To be honest, we didn’t know what to expect.  It had been raining on-and-off for days, and certainly showed no sign of letting up last night.  We had promoted this event a lot, though – through a variety of social media outlets as well as on Fox 28 and ABC 6 (thanks Johnny DiLoretto!) – so the word was out.

Results?  The turnout was, somewhat surprisingly, every bit the equal of our last taco tour, and the group’s enthusiasm held the dampness and chill at bay.  Generous servings of piping hot atole, hot chocolate, and cinnamon spiked coffee didn’t hurt either.

The trucks, of course, were fantastic at accommodating the crowds.  All of them provided tents for shelter, most offered up something warm to drink (and other treats) gratis, and a couple even donated a portion of their income from the night to charity.  Nobody does hospitality like taco trucks during one of our tours… and this is, I assure you, entirely without any sort of prompting from us (beyond simply letting them know that we’re coming).

To the 16 or so attendees who chose to travel the route on bikes – you have our sincere respect.  The weather made this something of a daunting ride, but this group just seemed to thrive on the adversity.

To everyone who attended – thank you.  We had a lot of fun chatting and getting to know many of you, and definitely got the impression that a good time was had by all. We can certainly say that your participation was worth it to the Mid Ohio Foodbank.

Special thanks to Studio 35, who generously donated all proceeds from the movie (not to mention the movie itself), and to Taco Nazo and Taqueria Jalisco for donating a portion of their income from the evening as well.  None of these guys are getting rich off of what they’re doing, making their generosity even more striking.

After all was said and done, this group effort raised over $450 for the Mid Ohio Foodbank.

We’d also like to thank Esteban.  This guy came out of nowhere a few months ago, said he liked what we’ve been doing, and offered to help in any way possible.  Since then, he’s been enthusiastically working to coordinate the trucks and the media events.  This simply wouldn’t have been the same event without him.

Quick note – there are still a few t-shirts left from last night.  If you’d like one, email us at tacotruckscolumbus@live.com and please include your shirt size.  You too can sport the latest in taco truck fashion, and for the bargain price of only $10!

Hungrywoolf and Ray George have posted photos to flickr here and here.  A few of our favorites:

Taco Nazo recreated their truck and its environs in cake!

Taqueria Jalisco, a beacon in the rain

Cyclists enjoying the offering at Taquikin 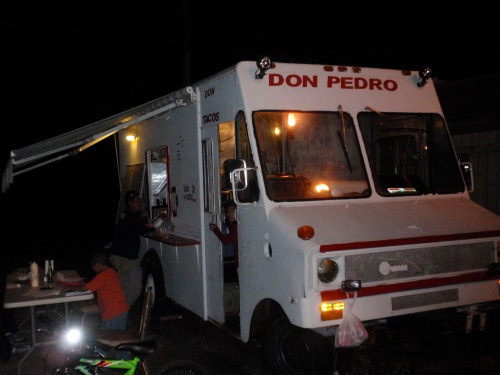 Don Pedro's Mexican coffee and delicious Pambazos were a hit!

The cake says it all