Sunoco Gas Station at the Intersection of Fisher Road and Hague Road
Open every day.
614.483.7837

Although there’s a limited selection of meat options (steak, chicken chorizo and al pastor), the menu selection at El Tuzo is otherwise quite broad. We were happy to see pambazos pop up again, but when we visited they did not have the ingredients for them. In addition to the regular menu items, they also have some weekend-only specials: tamales, tacos de chicharron and menudo. 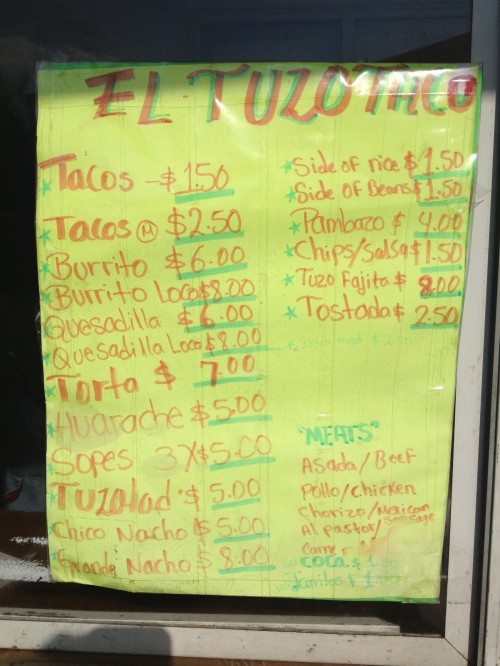 We tried a taco, a tostada, a hurache and a tamale and, between them, sampled all of the different protein options. Everything was perfectly passable, little struck us as exceptional. The tostada shell was made to order, a hand fried tortilla rather than a store bought one – a nice touch. The hurache was on the small side but serviceable. The tamale was made with green sauce and was nice and moist.

One more unusual dish is the ‘tuzalad’ which was a salad with your choice of meat plus lettuce, tomato, onion, cucumber and freshly fried tortilla chips. It’s not often that you see salads on taco truck menus. The meat shown in the photo was chicken, which had been marinated. We asked for the salsa (pictured) with ours as there did not seem to be any dressing.

One response to “El Tuzo Taco”