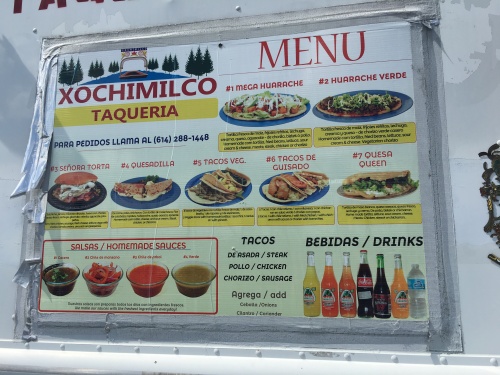 In discussing the menu with the woman in the window, I cobbled together a few words of high school Spanish. See seemed amused – maybe even impressed? – by this, which of course left me utterly charmed by her. Her husband, I assume, sensed that I didn’t understand a particular unlisted taco option, called picadillo, and said, ‘one moment, you try’. He turned around, worked a ball of masa between his hands, and pressed a fresh tortilla to get it started.

While I awaited this taste, a small spry woman strode up and announced that if we wanted to order, we needed to ring the bell. I hadn’t noticed it, but yes, there was in fact a sizable bell somewhat reminiscent of the liberty bell just sitting there on the counter. I told her that we had ordered, which was sort of true, and that she could go ahead. She asserted that everything was good here, and when asked what she orders she said chicken tacos this time, quesadillas others. She said that she’s from Vietnam but that she loves Mexican food. She didn’t say that this was her taco truck, the one she relies on and feels fiercely loyal to, the one where she feels like she knows the owners better than they think she does. She didn’t have to. 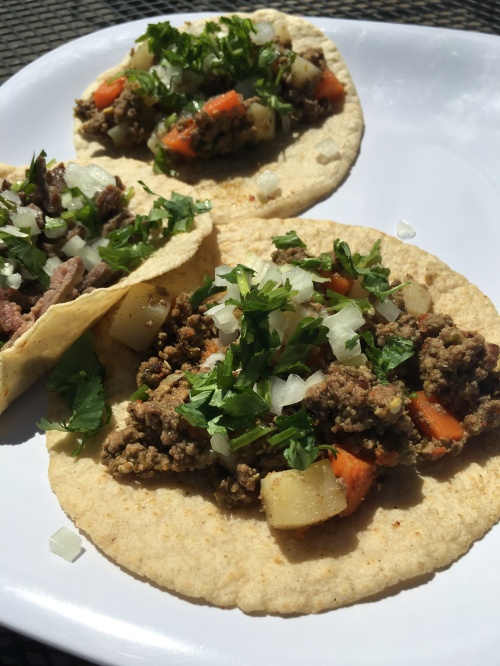 The picadillo taco arrived – ground beef, potatoes, carrots, cilantro, onion. A little spicy heat. It’s free, just try, they said. We did. Delicious. We ordered two more of them, plus one asada, one lengua, and three vegetable options – squash blossom, huitlacoche, and nopal. They had Squirt, which is rare and nostalgia inducing, so two Squirts, too.

With her takeout order secured, the Vietnamese woman said ‘good talking to you’ and walked with her food into the beauty supply store next door.

The tacos arrived neatly arranged on colorful plastic plates. When it’s 76 degrees and sunny and the taco truck provides street side chairs and tables, you sit there and you eat.  As a known quantity to ravenous appetites, the picadillos disappeared first. 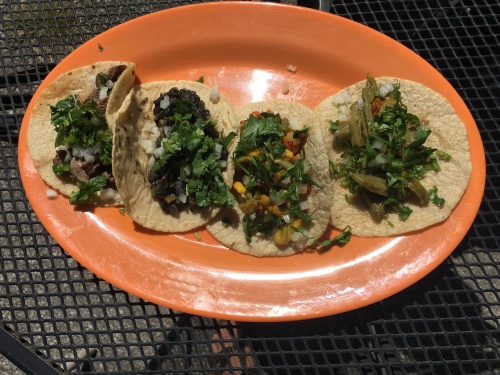 A trio of extravagantly hued robes floated by, inhabited by Somali women with soft expressions and purposeful gaits.

The asada and lengua were both solid examples of their kind, while the huitlacoche and nopal were only as good as something that comes from a can shipped from far away can be. 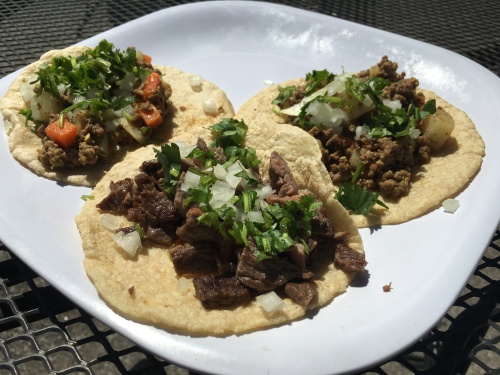 The squash blossom taco was best, and seemed perfectly in keeping with the experience – bright, eclectic, unusual but accessible. Squash blossoms, yes, but among what amounted to a grilled succotash medley. It may not taste as good to you as it did to me at that precise moment, but it’ll still be very good. 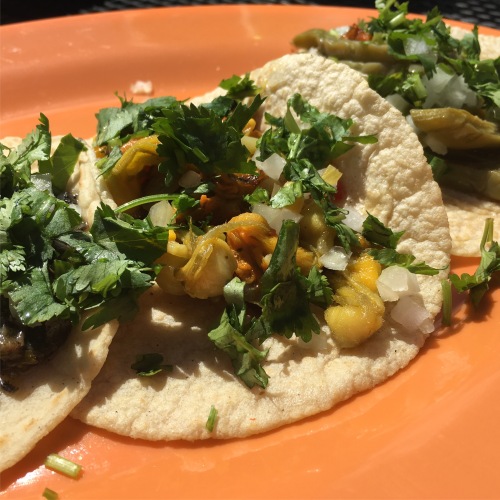 As we ate, customers lined up. Mexicans, construction workers, Mexican construction workers, guys with a truck whose contents led me to believe they were probably metal pickers. The woman in the window told the last person in line that it’d be a while before they could get to his order. Noting how quickly they’d become swamped, I smiled in sympathy. Seeing this, she looked at me with an expression of mock insanity and shouted, ‘beezy, beezy, beezy!’

As was the traffic on Morse Road, at least if sitting in lunchtime gridlock is busy. It’s an oft-overlooked section of the corridor for many, but it is alive. 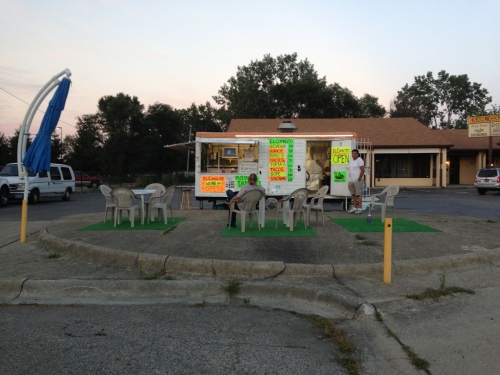 El Comalito is a little hard to spot, set back off of Karl Road in a curious little courtyard with a strip club on one side and a church on the other. Because of it’s slightly secluded location it feels a little more laid back than some of the other truck locations and feels like somewhere you could linger over dinner. They’ve got a nice little seating area (the carpet is a cute touch) and both times we’ve eaten dinner there we’ve enjoyed a great sunset.

The menu offers everything you’d expect and them some: tacos, tortas, quesadillas, burritos and also hurraches, sopes, tostadas, fajitas and nachos. On weekends they add posole – a delicious hominy-studded soup – and tamales (sweet and savory). This is the first place we’ve come across sweet tamales and on our first visit we enjoyed a pineapple tamale for dessert. 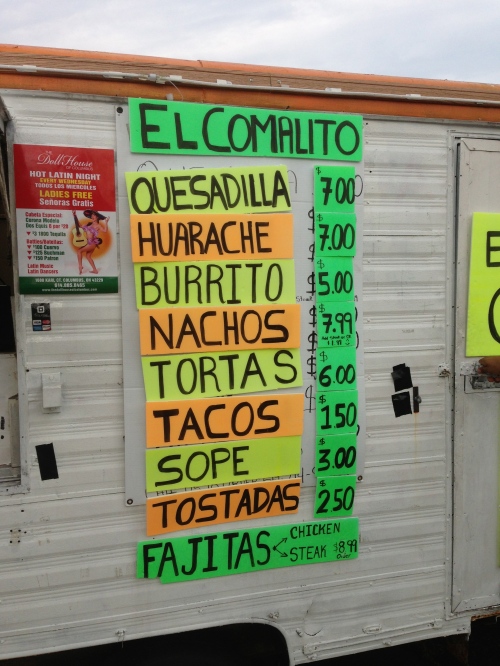 Our favorite meat option was probably the chicken, which was cooked tinga style with a little chipotle and had a great flavor. It’s pictured below on the sopes, topped with lettuce, crema, avocado and cheese. The chorizo and steak are also good options. 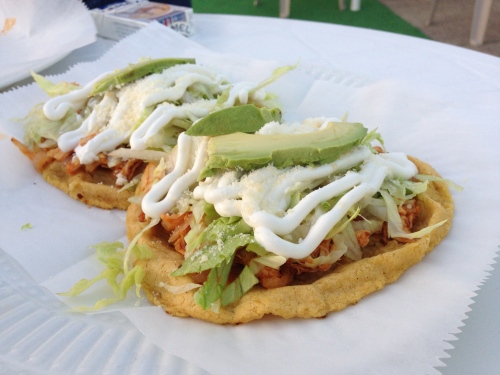 The al pastor was fine but a little overwhelmed by the overly sweet canned pineapple. All of the other dishes we tried – quesadilla, torta (below) and tacos were all solidly prepared. 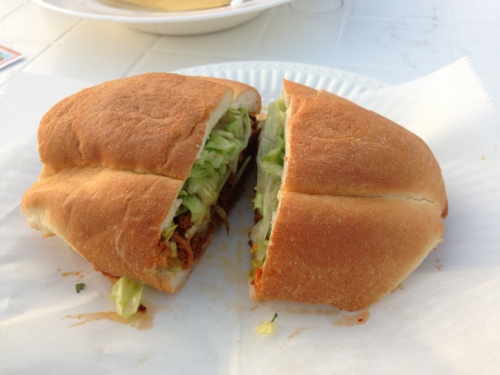 The owner is very friendly and engaging, and speaks good English. He’s also willing to deliver within a 2 mile radius of the truck. Chorizo tacos are $1 on Tuesdays and Thursdays. Salsas are housemade. Drinks are limited to sodas but they have a good range of Jarritos. 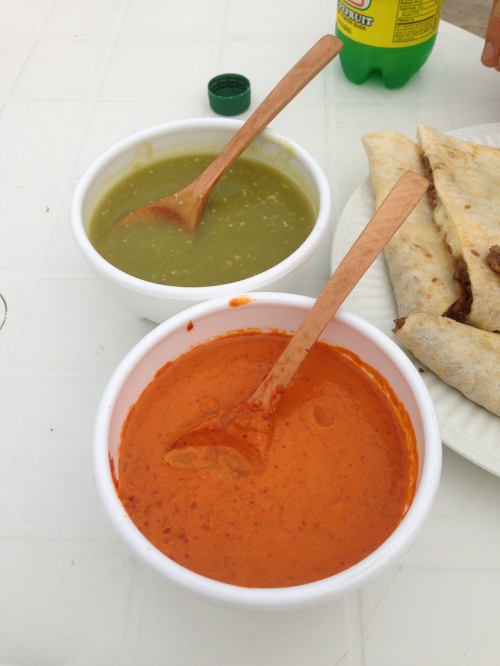 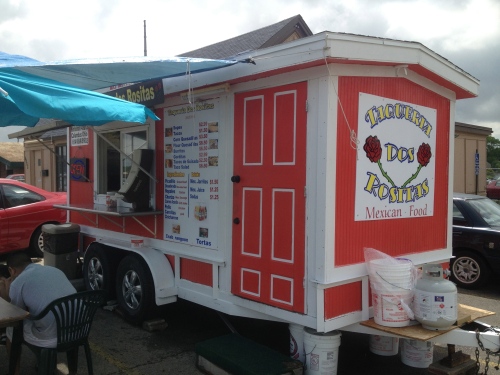 This post has been a while in coming, as this truck was closed for a while over the winter. 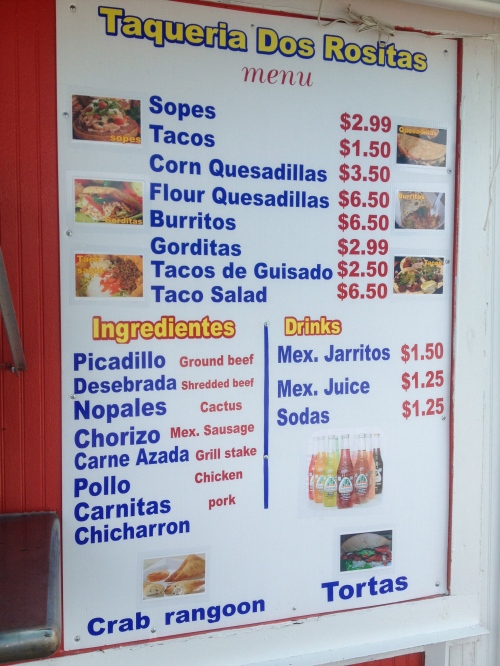 Taqueria Dos Rositas has expanded their menu a lot since last year and added some extra dishes (sopes and taco salad) and additional meat options. It is less common to see  nopales (cactus) , desebrada (shredded beef) or picadillo (ground beef) as options. It seems that they are trying to appeal both to Latino and American audiences. It’s certainly the first taco truck we’ve ever seen that’s serving crab rangoon! 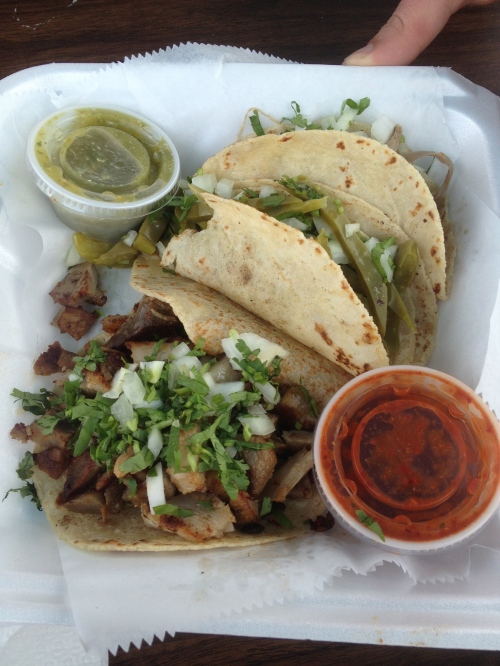 We had a few tacos including lengua which was pretty good and nopales. The highlight was definitely the homemade tortillas. Dos Rositas is a solid truck, so if you are out on the East side check them out.

Three Years of Taco Trucking – A Look Back 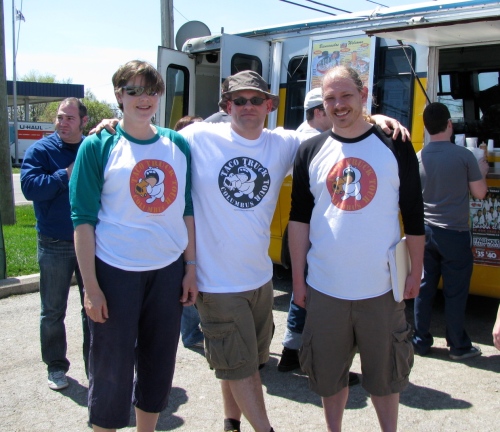 This month marks the third anniversary of Taco Trucks Columbus. We’re grateful in the extreme to all of you who have participated in this little endeavor of ours, be it as readers, truck-goers, commenters, or truck spotters.

As we look back on the past three years, we can’t help but be struck by how much something as simple as starting a blog has profoundly influenced the lives of all of the blog’s participants… often in ways we never would’ve imagined. Please allow us the indulgence of recounting:

Taco Trucks Columbus began as an OSU geography class project for Bethia. The class was Latin American Geography, and the project required research to be done within Columbus. Jim had noticed a few taco trucks around town and had been eager to explore them, so with this idea the topic was settled – Bethia was off to collect data, with Jim and I accompanying as tag-along culinary curiosity seekers.

We all enjoyed the taco truck food way more than any of us expected to, felt as though it filled a gaping hole for authentic Latino fare that was emphatically unfilled by more well known ‘Mexican’ food in Columbus, and wanted to let people know about it. 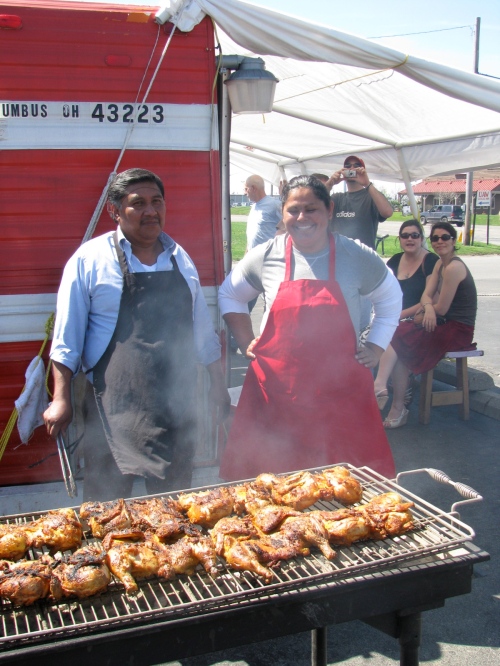 Within a few months of beginning the blog, it was clear that taco trucks captured the imagination (and taste buds) of our increasingly large readership. The interest fueled our desire to continue with the project. Meet-ups for our blog readers were thrown, funds were raised for Latino charities, and a good time sure seemed to be had by all. We routinely took journalists and the curious among our friends on impromptu tours of the trucks. 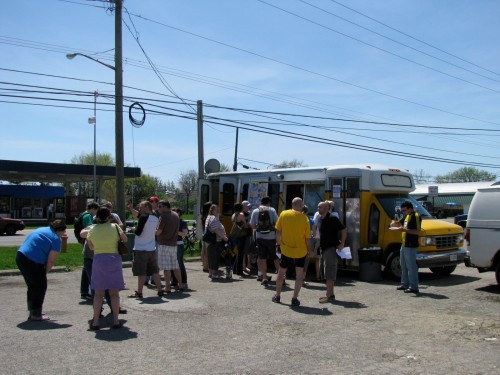 Taco trucking took us to a lot of areas in town we’d never been to before, and we couldn’t help but observe how many restaurants were in those areas. Moreover, we really couldn’t ignore the fact that few to none of them were getting any press… I mean, some of them had to be good, right? And, given their wide ethnic diversity, they had to expand upon the range of novel food offerings in town, no?

With our curiosity pointed in that direction, alt.eats.columbus (as in, alternative to what’s been covered in Columbus) was begun. Our hunch was correct – there was a lot of great immigrant kitchen food to be discovered.

Another unintended consequence of TTC was born of the popular conflation of taco trucks with food trucks in general. There was a presumption among many that we’d naturally be on top of developments among the rapidly growing non-Latino mobile food vendors. We really weren’t, at first, but once again it did seem to be something food-related that wasn’t adequately covered elsewhere.

And that’s how Street Eats Columbus came to be. That is also when, I suppose, the unifying theme of our blog work became explicit – to discover and expose, to the extent we could, everything food-related in Columbus that wasn’t widely discovered and exposed otherwise.

Which, when thought about in the abstract as such, could easily go in all sorts of different directions.

Like, for example, Columbus Food Adventures. Having discovered so many food options that we believed to be of real culinary value and interest, Bethia and I came to believe that a food tour business would give us a new means of exposing people to the restaurants, foods, and people behind them that we’d become so passionate about. And, to be perfectly honest, it provided an opportunity to make a living off of something that, up to then, had been a compensation-free endeavor. Both Taco Trucks Columbus and alt.eats.columbus have tours based upon them. 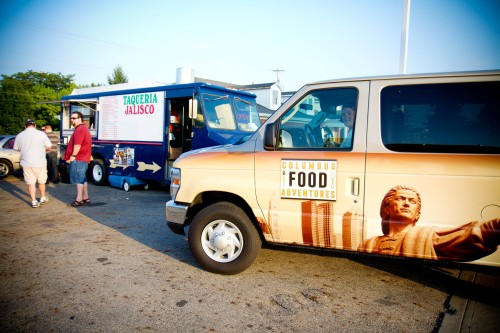 Having served just shy of 3000 tour-goers since July of 2010, we’re solidly entrenched in this new and enjoyable career of ours. As we suggested previously, we never could’ve seen that coming!

And then there’s Jim (aka CMH Gourmand) – a man who has forgotten more about Columbus’s food history than the rest of us will ever know. And, a man who, like many of us, had achieved a position of career comfort that kept the bills comfortably at bay while perhaps failing to make best use of his passions (this is certainly true with respect to his enthusiasm for all things food-related).

That is, until last October, when he signed on with the ECDI as the coordinator of their Food Fort program. Now, Jim is helping to shepherd the next generation of mobile food vendors into existence, as well as participating in the team that is building out a new incubator kitchen and providing technical assistance to new and existing food ventures. Thanks, in no small part, to Jim’s tireless efforts, we expect this to be a huge year for ‘street eats’ in Columbus!

The above amounts to a lot of reminiscing and ‘inside baseball’, but it’s a string of thoughts with a point: all of these somewhat improbable and positive developments are the result of your enthusiasm for our work, specifically starting with this blog. We thank you sincerely, we thank the all of the great folks that run the businesses that give us such great material to work with, and we look forward to sharing the upcoming taco truck season with you!

All of our best, 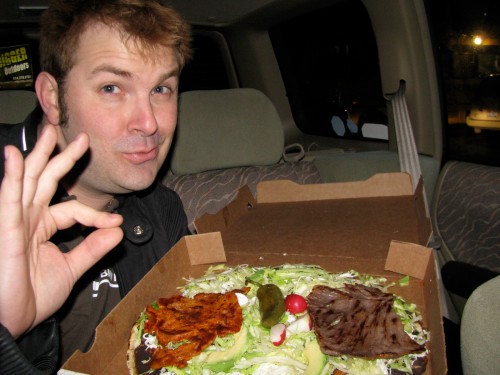 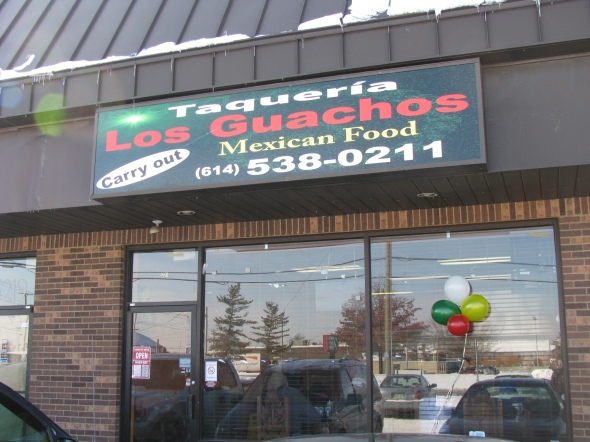 That’s right, perennial TTC favorite Los Guachos just opened a brand spankin’ new bricks & mortar restaurant serving all of the favorites (spit-roasted al pastor, anyone?) from their truck and more. To get the skinny, see our write up on alt.eats.columbus ->here<-.

If you haven’t subscribed to the alt.eats feed, we’d encourage you to do so. There are a couple of other trucks poised to make the leap to full restaurant operation, and alt.eats is where sit-down restaurants will be covered.