(This truck was a mainstay in the early days but was sold to new owners – see below for history)
Behind ENR  Transmissions & Auto Repair, 830 W. Broad Street
(Very convenient for Mt Carmel Hospital).
Click here to to map it!

We have been trying to find the mythical Souder Truck for months. The mystery is now solved – the truck that was in that location closed and after a hiatus, Chapis has been open in that same location for 3 weeks. It is run by two sisters and when I visited the daughter of one of the women was helping out.

The menu is extensive and there was also a sign saying that they have Menudo on saturdays.  Also on the menu is Guisado (a beef stew) that sounds interesting. Unfortunately when I visited they seemed to have a limited selection of meats and so I ordered carne asada and al pastor tacos. 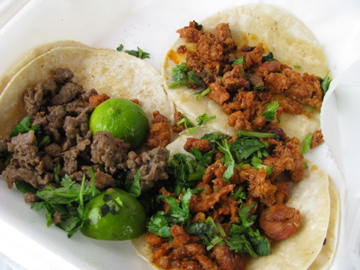 The al pastor was a little greasy, but I have been spoiled by Los Guachos and I am not sure that any other al pastor can compare. The horchata was so sweet that it was almost undrinkable and when I visited things seemed a little shambolic even though they weren’t that busy. Apart from being out of various ingredients, they got my order wrong, got the change wrong and had to repeatedly the other customer who was there what he wanted on his burrito. Hopefully they can iron out some of these teething problems soon. Chapis is worth trying if it is convenient, but not worth going out of your way for.

Fresh from its stint on the west side, Los Tolucos has been reopened by new owners at a location close to the airport. To be frank, they didn’t seem to be off to the most promising of starts. Service was slow and disinterested, and the food was mediocre on average.

There were a few bright spots, though: the cabeza tacos were above the bar, and the grilled onions and pepper made for a nice addition to the tacos.

OK, four words: spit roasted al pastor.  While Los Guachos has an abbreviated assortment of other meats (lengua, asada, tripa) there was no doubt that the al pastor is what brings the people in.  And bring ’em in it did – I don’t think we’ve ever seen any truck as crowded as this one (save, perhaps, for during the Taco Truck Tour…)

As the operation at Los Gauchos is easily the most open to view of any truck we’ve been to, the experience starts with observing the lynchpin of the operation – the ‘guacho’* manning the spit.  With one long slicing motion, he separates a generous pile of al pastor from the spit which drops into a tortilla in his left hand.  With a deft flick of the wrist, a thin slice of pineapple is separated from it’s place atop the spit and is caught atop the freshly sliced meat.  A dash of cilantro, and a sprinkling of diced onion, and you now have the Los Guachos specialty – the al pastor taco.  Our man at the carving station knocked out plates of 5 and 10 of these tacos all evening long – and crowded though they were, orders were dispatched with ease.

There’s something about this layout – the open truck, the groups of people sitting on the hoods of their cars and contentedly munching on tacos, that glorious rotating mass of glistening meat on display(!) – that lends a pleasant, ‘evening at a barbecue’ vibe to the occasion.   Inevitably, though, it also raises expectations. 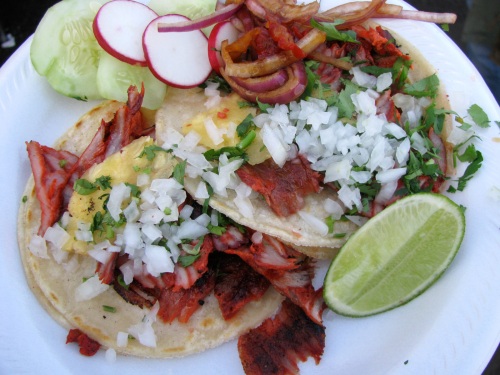 So, yeah, how were the tacos?  Well… our reactions ranged from wonderful, fantastic, delicious, words fail me, to pinch-me-I’m-dreaming good.  As far as we’re concerned, this is now THE place for al pastor.  Between four of us we ate 20+ tacos, and these things aren’t small.  We were all plotting our return as soon as we had taken the first bite.

Los Guachos also serves tortas, quesadillas, and gringas. The gringas are definitely a highlight too – similar to a quesadilla – a toasted flour tortilla covered in a thin layer of grilled and caramelized cheese with the meat of your choice (go with the al pastor again), onion and cilantro. 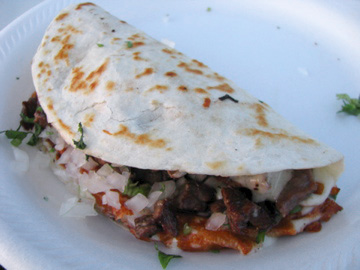 Los Guachos also scores high on the condiments. Unlike most other trucks they have large bowls out so that you can serve yourself with cucumber, radishes and two different pickles (one jalapenos and carrot, the other onion and red chili). They also have bottles of red (fairly hot and slightly sweet) and green (mild, refreshing, cilantro based) sauces.

To sign up for a Taco Truck Food Tour that includes a visit to Los Guachos, click here.

*’Guacho’, we are told, is a slang word used by Mexicans in the north of the country to describe southerners.

A special thanks goes out to Graciela, the commenter who first mentioned Los Guachos to us.