There’s a great new taco truck on Sullivant Avenue called Taqueria San Angel.  It’s between the Los Guachos turn off and Georgesville Road. The owners are from Oaxaca and are offering some Oaxacan specialties like tlayudas and Oaxacan style empanadas. We were excited to see them open as one of the previous Oaxacan trucks Tres Reyes disappeared over the winter.

This is the first place in Columbus that we remember seeing tlacoyos. Tlacoyos are similar to a Salvadorean pupusa as they are made of a masa dough that is stuffed with refried beans, cheese or meat and cooked on the grill. However they are football or torpedo shaped rather than being round and sometimes have toppings on them like a sope. 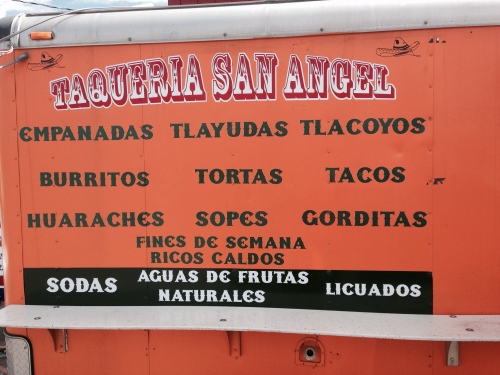 One of the highlights of Taqueria San Angel are the Oaxacan empanadas. The difference with these compared to other types of empanadas is that they are not sealed and they are cooked on the grill, so they are sort of a cross between a quesadilla and a large empanada. They have some really interesting and unusual fillings that seem to vary day to day. We’ve sampled huitlacoche (corn smut) which you rarely see on menus, zucchini flowers and mole. They also have mushroom and amarillo (Oaxacan yellow mole). Pictured below is the empanada with quesillo (string cheese) and huitlacoche. It has an earthy mushroomy taste. 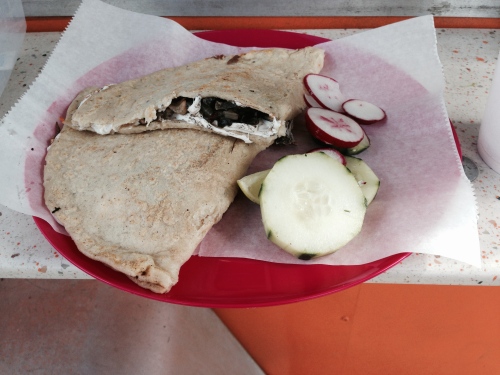 Another highlight is the home made agua frescas. We’ve tried both cantaloupe and watermelon (sandia) and both were excellent. Refreshing and not overly sweet with a little pulp.

The owner is clearly a very good cook and everything including the tortillas that we had have been home made. Here’s the tlayuda. The base was a little chewy but otherwise it was very good. 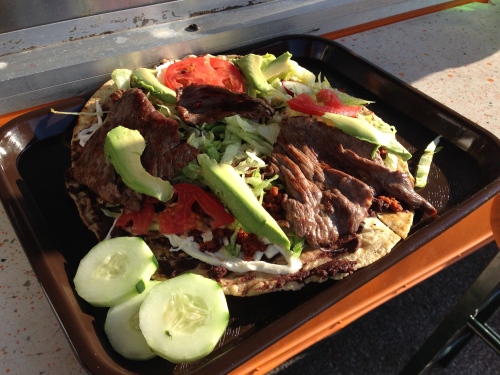 Taqueria San Angel has access to an indoor seating next to the truck with three tables.